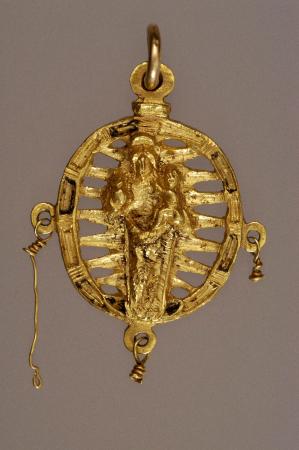 Devotional Pendant
To find out more click on the image above

Don Martin de Verganzo, Officer of the Inquisition
The Inquisition was an institution devised by the Catholic church in the late 12th century to counter heresy and unify obedience to the church. The Spanish Inquisition, perhaps the most infamous branch of this system, was a body established by the Spanish Crown to maintain the purity of Catholicism in the country and its territories. The Spanish Inquisition ran from 1478 to 1834, a period of 356 years. It was authorized to investigate heresy amongst baptized Catholics, but it was also a tool to maintain racial and ethnic dominance by Spaniards. In 1492, the Jews living in Spain were expelled. In that same year, Spain defeated the Muslim Moors, who had long occupied southern portions of the Iberian Peninsula. With the country unified, the desire was to have a wholly Catholic nation. The Moors and Jews who chose to stay in Spain could do so only if they converted to Catholicism. The inquisition provided a way to monitor and investigate those suspected of practicing their former religions in secret.

The Inquisition was a tightly controlled, self-sufficient entity, headed by the Inquisitor General and the Council of Inquisition, with regional and local offices and agents. The Inquisition had its own judicial system, which operated courts and prisons. There were sixteen provincial tribunals in Spain, two in the Italian possessions, and three in the Indies – Lima, Mexico, and Cartagena. The provincial offices had their own command structure, but much of the work was done by parish priests and “familiars” (familiares), or lay agents who did the footwork for the Inquisition – the collection of testimony and other evidence against suspected heretics.

The offenses against the Catholic church were not limited to the clandestine practice of Judaism or Islam. Aiding and abetting Protestantism in any was a violation; blasphemy, witchcraft, holding independent views outside of church doctrine, and even homosexuality, were all punishable “crimes.”

People were encouraged to report any acts of heresy by members of their communities, neighborhoods, and even families. Any testimony they provided to the Inquisition’s courts would remain secret. The familiares would track down any reported violators who did not respond to an inquisitorial summons. Suspected heretics were held in prison, and there they were encouraged to confess their transgressions. Sometimes, if the suspected offense was significant, and the person was not readily confessing, torture would be used to extract the information the Inquisition officers wanted to hear. Once heresy was determined, the Inquisition’s judicial process culminated in the auto de fe (act of faith), where the guilty learned their punishments. Periodically, as a symbol of the purpose and power of the Inquisition, the auto de fe was held as a grand spectacle in a city square and attended by all walks of life. After sermons and a mass, the heretics would be given their punishments. The sentences could range from public humiliation to death for those deemed incorrigible. After the auto de fe, those condemned to death were burned at the stake.

In the early 1800s, with Napoleon’s invasion and occupation of much of Spain, the Inquisition’s stranglehold on public life was broken. After the French were expelled, there were attempts to resurrect the Inquisition, but rationalist philosophies of the Age of Enlightenment were gaining influence. The strict, doctrinaire thinking represented by the Inquisition was making less sense to the public. In 1834, Queen Maria Cristina formally abolished the Inquisition. After 356 years, the clouds of fear and suspicion evaporated.
Don Martin de Verganzo, Officer of the Inquisition