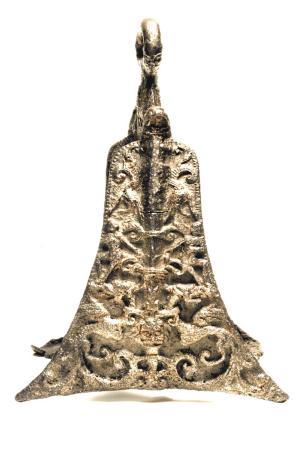 Stirrup
To find out more click on the image above

Captain Bartolome García de Nodal
For millions of years, the Atlantic Ocean had separated the Americas from Europe and Africa. The Americas were especially isolated, being that the Pacific Ocean had the same effect to the west. With the isolation, the continents developed their own biospheres. The barrier of water kept the west side of the ocean from interacting with the east side and prevented their biological comingling. Plants, animals, insects, and microorganisms could not navigate the vastness of the water.

However, in 1492, when Christopher Columbus succeeded in crossing the Atlantic, the situation changed. With those first transatlantic voyages, the gates were essentially thrown open as a steady stream of ships carried all manner of living organisms back and forth. This ship-driven biological transfer, dubbed “The Columbian Exchange,” had a particularly profound impact in the first 150 years of European colonization of the Americas as natural balances, achieved over millennia, were suddenly upended.

The exchange had profound consequences. With the introduction of diseases to which Native Americans had never been exposed and had no immunity, human mortality rates in the Americas skyrocketed. By 1650, the pre-Columbian Indigenous population had been reduced by 80-90%.

The decline in Native peoples left a void in European plans to exploit them for labor. That dearth of workers created a need for another group, and European eyes turned toward West Africa, where people had already begun to be bought and sold for slave labor. Sailors and Africans brought yet another round of diseases from yet another continent. Europeans were not immune to African diseases and Africans encountered new illnesses on top of the horrors of slavery itself.

There were also beneficial consequences. Some food crops thrived in their new environments. Potatoes, tomatoes, and peppers grew very well in Europe and Asia while casava, corn, and peanuts did the same across large areas of Africa. The new crops provided previously unavailable levels of nutrition and calories, and populations in these areas grew. Among the most significant and longest-lasting of these contributions was the introduction of the horse and the pig.

We think of the early Spanish ships bringing colonists and new religion to the Americas, and then returning laden with treasure. But the reality is much more complicated and impactful.