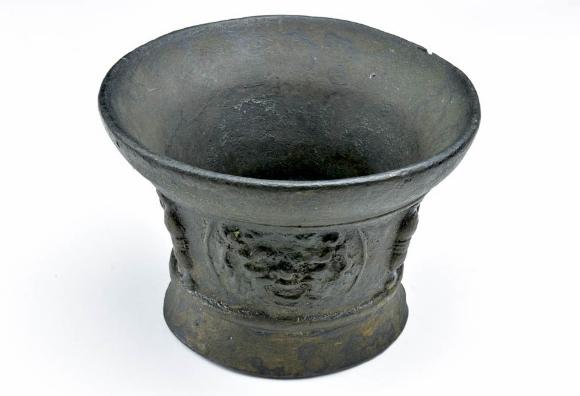 Mortar
To find out more click on the image above

Antonio Fragoso was a surgeon. Originally, he lived in Huelva, Spain, although records from 1622 indicate two places of residence for him—the coastal city of Callao, Peru and Alcalá de Henares near Madrid. Fragoso married doña Maria de San Andres, and they had two daughters, Juana Barba and Anna Maria.

In 1609, Antonio Fragoso was granted permission to move to Peru.1 In his application, he gave interesting insight into his circumstances and the need to make the move: “I say that I have two legitimate daughters—Juana Barba and Anna Maria—in the house where I live and under my paternal power and protection. And as for sustaining them, I am a poor man. I have no assets other than my profession as master surgeon, by which I live and sustain my house and family, and being an honest man of good life and fame. Being as I have no assets, I cannot provide for my two said daughters, for whose benefit it suits my claim to move to Tierra Firme [South America] in the Indies, because by being there I will have a better ability to aid my said daughters and support myself by my trade—and I have in the Ciudad de Los Reyes [City of Lima] a legitimate son named Manuel Francisco Barba, a merchant, brother of my said daughters, who is rich and can help me and his sisters as he has given and promised by his letters ….”

In the same document, Antonio Fragoso was described as “a medium-bodied man; light complexion and large face; small black eyes; bushy beard, his hair thinning, and on the thumb of the right hand a scar from a wound; he is a man of good flesh, though somewhat thick-bodied.” In addition to his family, Fragoso was accompanied in the 1609 voyage by a fifty-year old servant or assistant named Domingo Gomez.2

Antonio Fragoso was neither a mariner nor the official surgeon for the Nuestra Señora de Atocha—that title fell to 25-year old Cecilio de Ribera—but the two men would have possessed similar skill sets and, if need be, Fragoso could have attended to the sick and wounded on the galleon. The medical officer provided medications, bled people, and performed any surgeries, including amputations. A surgeon’s kit at the time would have contained scalpels, saws, knives, scissors, forceps, enema syringes, and probes, along with a variety of drugs, syrups, salves, and plasters.3 They also prescribed special, curative foods, such as eggs and raisins, not available to everyone.

Since his daughters stayed in Peru, we can assume that they made the advantageous marriages that Fragoso hinted he hoped for in his travel application. He had known, as had his son, that few Spanish women lived in the colonies and the girls could have their pick of suitors, despite the fact they had no dowries.

Fragoso had met with some success in Peru, as the Atocha’s manifest shows him sending a small parcel of silverware: four small bowls, a small pot, and eight spoons, all weighing just under four pounds.