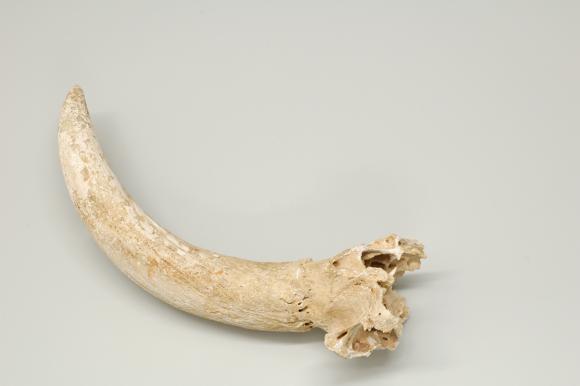 Bull Horn
To find out more click on the image above

The manifest of the Nuestra Señora de Atocha lists a twelve-year-old boy, Francisco, as a page (ship’s boy). It describes him as a “dark black boy…thick-lipped.” Neither his parents nor his place of birth are listed, but he was probably one of the many seafarers in the Spanish fleet system who came from Seville.

By 1622, Spain had a substantial population of African descent. Seville, the river port that was the launching place for Spain’s maritime empire, was known as the “checkerboard city,” denoting that any crowd of Sevillians held an equal number of light and dark-skinned faces. Non-Europeans were active in the community, with careers that ranged from the humblest laborer to artisans, merchants, musicians, and artists.1 By 1565, it is calculated that as many as one in fourteen inhabitants of Seville were enslaved,2 but they were not necessarily Africans. They might be from the Canary Islands or from Portuguese holdings in India or Brazil. Others might be North Africans, Berbers, Chinese, Tartars, or Slavs. Yet others were Moors, descended from the Spanish Arabs who had dominated the country for almost 800 years before their defeat and expulsion in 1492.

Enslaved or free, many such people often established support network among others of similar heritage. “Los Negritos” was a powerful Catholic fraternity of African people that played an important part in religious and civic life while providing a mutual aid society for its members.

As a page, Francisco could anticipate “learning the ropes,” so that he could eventually become a skilled sailor or achieve even higher rank. But pages fell into two categories—those who had a relative on board who would look out for them and possibly hasten their advancement, and those who did not. Francisco seems to have been one of the latter. Their jobs were menial—they had to clean the ship, distribute foodstuffs, clean up after meals, and do anything that a sailor commanded. Their most responsible task was to turn the sandglass every half hour and recite psalms when they did so. The sandglass was the only timepiece that could function reliably on a rolling ship where the accurate accounting of the passage of time played a crucial role, not only in organizing the sailors’ “watches” but also in navigation.

Aboard the Atocha, there were sixteen pages and forty-one slightly older apprentice sailors. All of them may have gone to sea at a much younger age—between eight and ten years old was common. Most pages advanced to become apprentice sailors around the age of sixteen.

One of the sailors, Diego Martin, was another mariner of color on Atocha. He was described as pug-nosed and having “quince-colored” areas on his face. Importantly, it was noted that he was “assured to be free” [consto ser libre]. Membrillo or skin the color of cooked quince, was considered to indicate heritage from the Canary Islands, whose people were frequently enslaved by the Spanish.3


1Juan de Pareja, originally the slave of the painter Diego Velasquez, became a respected artist in his own right. Born in southern Spain, he was of mixed race. There is no record of how he came into Velasquez’s household, but he seems to have done so while the painter lived in Seville. He accompanied Velasquez as his assistant on a trip to Rome in 1649. Velasquez freed him in 1650 and he continued as a painter in his own right.
2“Seeing Indios in 16th Century Castile,” Nancy E. van Deusen, William and Mary Quarterly, 3rd series, 69, April 2012.
3Ibid.