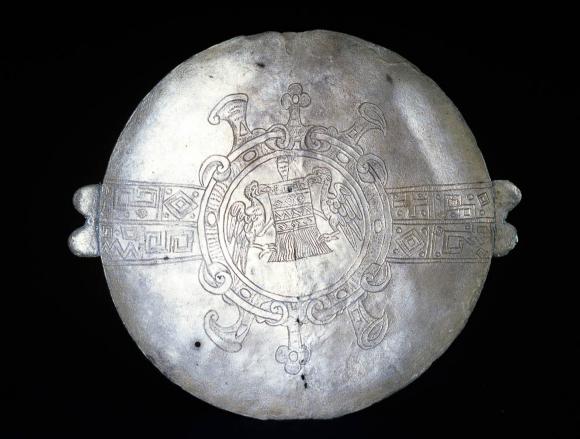 Plate
To find out more click on the image above

Martin Salgado de Rivera had traveled from Spain to Peru with his wife, Doña María de Ayala,
in 1615. They were both part of the company of the newly appointed viceroy, Francisco de Borja y Aragón, the Prince of Esquilache.1

Salgado held a number of high-level positions in the Andean silver-mining city of Potosí. In 1616, he was appointed treasurer of the mint there, while also serving as the regional tax-collector.2 In 1617, Salgado became the fiscal administrator of the “grains”—a municipal fund based on small, daily, half-real payments collected from the mitayos (Native people forced to contribute labor in the mines), which was used to finance the administration of the mines.3 At the same time he was made the “Protector of the Indians” of Potosí, which meant that he was to defend the rights of the area’s Indigenous people within the Spanish system, especially in court. In 1618, the Viceroy promoted Salgado to Treasurer of Potosí. By 1621, he had become the Secretary for the Viceroy, a position that put him at the center of Peru’s political world.

Salgado’s career in Peru was based on political patronage: his employer, Viceroy Francisco de Borja, lost his benefactor when King Philip III died in March of 1621, so he returned to Spain in December. Salgado was likely following suit when he took passage on the Atocha a few months later. Salgado had become a wealthy man in Peru, and he was shipping 24 silver ingots and five chests of silverware on board the Nuestra Señora de Atocha.